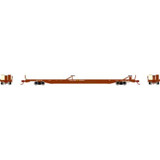 Detailed Information F89-F89'8" TOFC FLAT MODEL FEATURES: Die-cast body Weighted for trouble free operation Raised and lowered hitches included Use for dedicated intermodal trains or mixed freight Detailed deck Decorated models fully-assembled and ready to run out of the box Separately applied wire grab irons and ladders Separately applied brake ratchet Machined metal wheels Body mounted McHenry operating scale knuckle couplers Wheels with RP25 contours operate on Code 55 to 80 XTTX version: cars have 4 hitches to handle different trailer lengths. Extra raised and collapsed hitches included to model any configuration. PROTOTYPE HISTORY: Introduced in the early 1960s, the Trailer Train (now TTX Company) F89F flatcar has been a mainstay of contemporary railroading. A product of Bethlehem Steel Company's (BSC) Johnstown, PA plant, over 9,000 of these (89' 8" over the strikers) cars were built throughout the 1960s. Visually distinctive from other long flatcars of their era thanks to their "C" channel side sills, these versatile cars were adapted for many types of service and loadings over the years, ranging from Trailer-On-Flatcar (TOFC), to autoracks, to structural steel loading. While the majority went to Trailer Train, many were built for various railroads, typically for autorack service. Many were "de-racked" in later years, being reassigned and equipped for other service - TOFC, vehicle loading, pipe service, etc. It wasn't unusual for these cars to see several different loading configurations throughout their careers, in order to meet the changing needs of shippers. In service with Trailer Train, the three or four-letter reporting marks indicated the cars' intended service and corresponding equipment. For example, an "XTTX" car was equipped with four collapsible hitches, capable of carrying various combinations of 28', 40', or 45' trailers. A car in the "RTTX" configuration featured a pair of fixed hitches at the ends, and a retractable hitch amidships, allowing it to carry a pair of long (up to 45') trailers back-to-back, or three 28' "pup" trailers. This Athearn model was designed from the start to incorporate as many prototype details and variations as possible, based upon field measurements and builder diagrams, in order to appeal to modelers of multiple eras. Many new hitches, body variants, and other separate details were created, allowing us to accurately offer these cars in their different configurations over the years, from four-hitch "XTTX" cars, to the distinctive drawbar-connected "TTEX" Triple-57 "Long Runner" bulge-deck conversions introduced in 1987. And you can rest assured of its smooth performance, thanks to a heavy die-cast frame for reliable tracking. Operationally, these cars are appropriate for any layout set from the 1960s to the present day. In TOFC service, F89Fs could be found mixed into manifest trains, or as part of dedicated TOFC trains. It also wasn't uncommon to find them mixed into stack trains, alongside such cars as Gunderson Maxi-Is or Maxi-IIIs. Athearn N Scale F89-F89'8" TOFC Flat Road Name: XTTX Road Number: 153290 Photo may not show actual road number . Please see description for actual road number

MSRP: $34.99
$27.20
Features Painted wheels Rubber tires Fully-assembled and ready to use out of the box Painted and printed for realistic decoration Officially Licensed UPS Product
Add to Cart Quick view

MSRP: $31.95
$25.88
The prestigious Valor Awards are America’s time-honored tradition of recognizing the acts of valor performed by Soldiers, Sailors, Airmen and Marines. These 40’ hy-cube box cars will include a...
Add to Cart Quick view
Sale