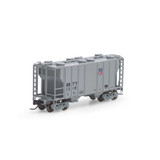 The PS-2 2600 cu ft covered hopper first entered service in the 1960s. The car was popular for cement and sand service and could still be found in use well into the 2000s. The most common service was cement and sand. Occassionally used as buffer cars in instances were a bulk load was not protected by a bulkhead, for example an uprotected lumber load on flat car would require a buffer car between the load and the locomotive.

MSRP:
$99.99
MIDWEST MODEL RAILROAD MYSTERY BOX - Limited Quantity Available - Wouldn't you like the experience of Christmas morning anytime you want? We are offering a new product that may satisfy that...
Out of stock Quick view