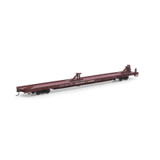 The 85’ flatcar was introduced in the 1960’s to accommodate the latest 40’ trailers that were just being introduced on the nation’s highways. Each flatcar was set up to transport two of the trailers. Subsequently, these dedicated TOFC (Trailer On Flat Car) flatcars became the defacto standard for intermodal service during this era.