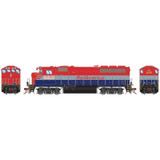 Purchased second hand from CN, these locomotives were given another life operating in the mid-west for TPW, painted in their corporate RailAmerica colors.