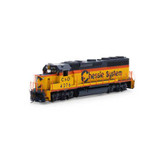 C&O GP40-2 #4276 is a part of EMD Order Number 776085 built in January of 1978.  It is from the 3rd order of Phase 2a1 units. (4262-4281) this order differs from previous orders by having dual strobe lights and louvered battery box doors.  It also is the first order to have Stickers used for instructional labels vs. paint stencils.  The units also exhibit unpainted Aluminum K5LA horns and yellow painted front head light housings.