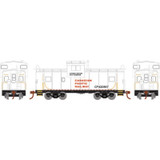 Perhaps one of the most recognizable icons of American railroading, the caboose completed the train. Cabooses provide shelter for crew at the end of a train, who were long required for switching and shunting, and to keep a lookout for load shifting, damage to equipment and cargo, and overheating axles. In the extended-vision or wide-vision caboose, the sides of the cupola project beyond the side of the car body. Rock Island created some of these by rebuilding some standard cupola cabooses with windowed extensions applied to the sides of the cupola itself, but by far, the greatest number have the entire cupola compartment enlarged. This model was introduced by the International Car Company and saw service on most U.S. railroads. The expanded cupola allowed the crew to see past the top of the taller cars that began to appear after World War II, and also increased the roominess of the cupola area.