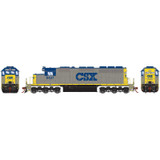 When the CSX Transportation merger was completed in 1987, CSX inherited 138 SD40 locomotives. With plans to retire their aging fleets, CSX decided to upgrade 125 SD40s to EMD’s Dash-2 standards. The rebuild program would make structural and corrosion repairs, and perform general overhaul work to the SD40 locomotives. After 25 units were first rebuilt in the “Stealth” scheme, CSXT #8410 was the first unit to be rebuilt and painted in the updated “YN1” paint scheme, outshopped on Nov. 10th, 1989. This paint scheme introduced yellow hues to both the front and rear of the locomotive, along with adding a yellow trim to the side sill, aiding in visibility. 47 more rebuilds were completed in the YN1 scheme up until March 23, 1990. At the end of March, two final rebuilds were released from the Huntington shops in the brand new YN2 scheme, completing the program. Many of these SD40-2 rebuilds retained their “YN1” paint scheme well into the late 2000’s.