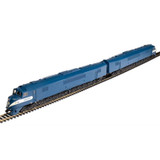 The Baldwin 12-8-1500/2 were BLW's first serious attempt at a production road diesel locomotive.   Baldwin built the famous "Centipedes" between 1945-48.   The carbody rode on two enormous articulated half-frames that were linked at the middled with a hinged joint.  One unpowered four-wheel truck at each end guided the locomotive through curves and helped provide stability.  The Centipedes were huge - 91.5' feet long for single units as operated on SAL and NdM.  Semi-permanently coupled pairs, as operated on the PRR, were 183' long!   Each unit contained two 1500 horsepower diesel motors, so a pair contained four motors and totaled 6000 horsepower.  Centipedes were heavy, totaling 1,200,000 pounds (1.2 million) for a pair, with more than 800,000 of those pounds carried by the 16 drivers.

In 1945, the prototype A1-A2 set toured American railroads and three railroads placed orders - PRR, SAL, and NdeM.   Union Pacific originally ordered two units, but never took delivery.  Unfortunately, the Centipedes did not last long in service.   PRR and SAL retired theirs by the early 1960's and NdeM followed in the late 60's.   The Centipedes were enormous, and maybe the most unique diesel locomotive design of the era, but they could not compete with the more capable EMD locomotives.

In our 2022 production of Centipedes, we are offering models in all of the prototypical paint schemes, including the Demonstrator scheme.   We are also offering two Union Pacific sets.  There has been a debate over the years about which road numbers the units would have been assigned, so we have built models painted for both 1600A/1601A and also 998/999.