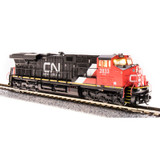 Broadway Limited is excited to release its most modern diesel locomotive ever -- The GE ES44AC. The Evolution Series 4400HP DC Traction locomotive is part of GE Transportation Systems line of diesel locomotives that were built to meet the EPAs 2005 Tier 2 locomotive emissions standards. All Evolution Series locomotives delivered to the North American market are six axle locomotives equipped with Nathan-Airchime K5HL-R2 Evolution airhorns. The GE ES44AC is still in use today serving the entire nation through a variety of hauling tasks including traffic resulting from the Ethanol mandate. CSX has some 200 units on or coming onto its roster, while Iowa Interstate ordered 14 units. Norfolk Southern purchased 24 units, receiving the first of its allotment in 2008. This spectacularly detailed modern diesel will come equipped with our cutting edge Paragon3 Sound and control system   -- yet another way that Broadway Limited leads the pack in model railroading technology.

MSRP: $339.00
$215.10
This wide cab–style locomotive was originally offered by General Electric as an option for the Dash 8-40C, later becoming the standard for their series of contemporary freight locomotives...
Add to Cart Quick view

MSRP:
$99.99
MIDWEST MODEL RAILROAD MYSTERY BOX - Limited Quantity Available - Wouldn't you like the experience of Christmas morning anytime you want? We are offering a new product that may satisfy that...
Add to Cart Quick view