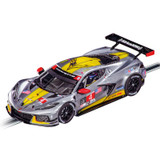 MSRP:
$33.22
Extension for the looping section on a scale of 1:43 DIGITAL 143, GO!!! Plus, GO!!! Action feature for the race track Package contents: 8 x looping parts with supports Ready for an exciting ride...
Add to Cart Quick view

MSRP:
$14.72
2015 Chevrolet Camaro ZL1 in cool "Sheriff" design Carrera GO!!! Police car with flashing light Scale 1:43 From 6 years Law and order on the streets When it comes to putting a stop to gangsters and...
Add to Cart Quick view

MSRP:
$46.02
Fast-paced car racing action on 14.10-ft of track with realistic cars that reach scale speeds of 370-mph Carrera battery technology gives you the same speed and power as electric sets to provide...
Out of stock Quick view

MSRP: $869.99
$707.09
Often called the largest steam locomotive ever made, and certainly a contender for the Worlds Most Famous Locomotive, the Big Boy was forged under some of the most strenuous demands ever placed on a...
Out of stock Quick view

MSRP: $349.00
$143.33
The electric GG-1 was introduced in the 1930s by the Pennsylvania Railroad, which needed a locomotive that could carry more rolling stock at greater speeds. Its dynamic streamlined design captured...
Out of stock Quick view