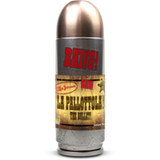 BANG! THE BULLET A CARD GAME OF... BIG CALIBER! Ever since it all began, the Outlaws have been hunting down the Sheriff. The Sheriff hunts down the Outlaws. The Renegade plots in the shadows, ready to take sides on one side or the other... Who will be the ruthless Outlaw, who is waiting for nothing more than to take out the Sheriff? To find out, you have to take the cards... At one point, under the scorching sun of a Fire Noon, unexpected events moved the gunmen between shootings and ghost towns. The frontier has widened to the city of bison, Dodge City, flourishing and dangerous: here new characters clash who act in an unpredictable way. And when the going gets tough, all that remains is to play everything for a Fistful of Cards... absolutely different. As if that were not enough, sometimes even stranger gunslingers sprout from secret shelters, really difficult to catch. Today, finally, the Sheriff has decided to close the matter in his own way. With a bullet with the name on it. This name is BANG! ThisÂ special edition in a bullet-shaped metal box contains the cards from the base game of BANG! and three expansions! DV Giochi BANG! The Bullet Playing Time: 20-40 minutes Number of Players: 4-7 Suggested Age: 8+

MSRP: $22.90
$17.00
The Outlaws hunt the Sheriff. The Sheriff hunts the Outlaws. The Renegade plots secretly, ready to take one side or the other. Bullets fly! Who among the gunmen is a Deputy, ready to sacrifice...
Add to Cart Quick view

MSRP: $10.90
$8.24
NO LAWS IN THE WHOLE WILD WEST CAN STOP THEM! THEY ARE STRONG, TERRIBLE, GREEDY, AND THEY ARE MAD! NEW RUTHLESS GUNSLINGERS RUN ABOUT THE WILD WEST AT BREAKNECK SPEED, PANICKING THE OTHER GUNMEN...
Add to Cart Quick view

MSRP: $17.90
$13.52
A CASCADE OF GOLD NUGGETS WILL BE THE REWARD FOR THE QUICKEST GUNSLINGER IN GOLD RUSH, THE LATEST EXPANSION FOR BANG! EARN SHINY GOLD NUGGETS AND BUY NEW EQUIPMENT, WHILE THE NEW SHADOW-GUNSLINGERS...
Add to Cart Quick view

MSRP: $17.90
$13.52
In the Wild West, the eternal battle between the Law and the Outlaws keeps heating up. Suddenly, a rain of arrows darken the sky: it`s an Indian attack! Are you bold enough to keep up with the...
Add to Cart Quick view

MSRP: $12.99
$9.32
BANG! HIGH NOON + A FISTFUL OF CARDS FROM TODAY, TWO EXPANSIONS IN ONE BOX! Two sets of cards to add to the BANG! game, to wreak havoc among the gunslingers of the Wild West. The special events of...
Add to Cart Quick view

MSRP:
$47.95
This kit includes over 30 metal parts to make an accurate representation of this Maintenance of Way rail machine. Photo Etch details are included for super detailing right out of the package. Front...
Add to Cart Quick view

MSRP:
$21.45
Our inspiration for this truck literally drove up to the shop to fill up our propane metal melting tank for Showcase Miniatures. We have posted some pictures of the truck here for you to see. This...
Out of stock Quick view