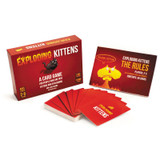 Exploding Kittens is a kitty-powered version of Russian Roulette. Players take turns drawing cards until someone draws an exploding kitten and loses the game. The deck is made up of cards that let you avoid exploding by peeking at cards before you draw, forcing your opponent to draw multiple cards, or shuffling the deck. The game gets more and more intense with each card you draw because fewer cards left in the deck means a greater chance of drawing the kitten and exploding in a fiery ball of feline hyperbole. Exploding Kittens Exploding Kittens: Original Edition Playing Time: 15 minutes Number of Players: 2-5 Suggested Age: 7+

MSRP:
$18.20
Imploding Kittens is the first Expansion of Exploding Kittens, the award-winning card game that made Kickstarter history as the most-backed project, ever. This Expansion deck includes 20 new cards...
Add to Cart Quick view

A Modelers Life - "The Original" Hoodie

A Modelers Life - "The Original" Mug

MSRP:
$15.00
Whether you're drinking your morning coffee, evening tea, or something in between—this mug's for you! It's sturdy and glossy with a vivid print that'll withstand the microwave and dishwasher.•...
Out of stock Quick view

MSRP:
$18.20
Imploding Kittens is the first Expansion of Exploding Kittens, the award-winning card game that made Kickstarter history as the most-backed project, ever. This Expansion deck includes 20 new cards...
Add to Cart Quick view

MSRP: $59.99
$47.99
Make the right decisions to lead your civilization to prosperity! Lead one of the seven greatest cities of Antiquity. Develop your civilization on a military, scientific, cultural, and economic level...
Add to Cart Quick view

Days of Wonder DO7225 - Ticket to Ride: First Journey

MSRP: $34.99
$27.99
Players of all ages can now venture across America by train in Alan R. Moonâ€™s Ticket to Ride: First Journey! With a brand-new map and simplified rules, First Journey is the perfect way to introduce...
Add to Cart Quick view

MSRP: $59.99
$47.99
From the craggy hillsides of Edinburgh to the sunlit docks of Constantinople, from the dusty alleys of Pamplona to a windswept station in Berlin, Ticket to Ride Europe takes you on an exciting train...
Add to Cart Quick view