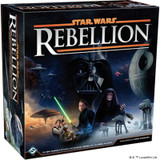 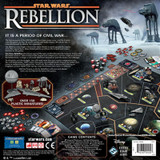 Star Wars™: Rebellion is a board game of epic conflict between the Galactic Empire and Rebel Alliance for two to four players!Experience the Galactic Civil War like never before. In Star Wars: Rebellion, you control the entire Galactic Empire or the fledgling Rebel Alliance. You must command starships, account for troop movements, and rally systems to your cause. Featuring more than 150 plastic miniatures and two game boards that account for thirty-two of the Star Wars galaxyâ€™s most notable systems, Star Wars: Rebellion features a scope that is as large and sweeping as any Star Wars game before it.Yet for all its grandiosity, Star Wars: Rebellion remains intensely personal, cinematic, and heroic. As much as your success depends upon the strength of your starships, vehicles, and troops, it depends upon the individual efforts of such notable characters as Leia Organa, Mon Mothma, Grand Moff Tarkin, and Emperor Palpatine. As civil war spreads throughout the galaxy, these leaders are invaluable to your efforts, and the secret missions they attempt will evoke many of the most inspiring moments from the classic trilogy. You might send Luke Skywalker to receive Jedi training on Dagobah or have Darth Vader spring a trap that freezes Han Solo in carbonite! Fantasy Flight Games Star Wars: Rebellion Board Game Playing Time: 180-210 Number of Players: 2-4 Suggested Age: 14+

MSRP: $44.95
$37.42
"Assuming that I was sane and awake, my experience on that night was such as has befallen no man before. It was, moreover, a frightful confirmation of all I had sought to dismiss as myth and dream." ...
Add to Cart Quick view

MSRP: $69.99
$55.99
Whoâ€”or whatâ€”is out there? Colonize the galaxy inÂ Cosmic Encounter! This game of interstellar exploration, negotiation, and conflict invites three to five players to lead their own unique...
Add to Cart Quick view

MSRP: $59.95
$55.99
The End of the World Draws Near! The world stands on the brink of catastrophe. The year is 1926, and an elder being of unfathomable power threatens to awaken from its long slumber, bringing death and...
Add to Cart Quick view

MSRP: $69.99
$55.99
Dead of Winter: A Crossroads Game is a story-centric game about surviving a harsh winter in an apocalyptic world. The survivors are all dealing with their own psychological imperatives but must still...
Add to Cart Quick view

MSRP: $109.99
$87.99
Embark on your own adventures in J.R.R. Tolkienâ€™s iconic world with The Lord of the Rings: Journeys in Middle-earth, a fully cooperative, app-supported board game for one to five players! Youâ€™ll...
Add to Cart Quick view

MSRP: $89.99
$70.46
Dive into the world of Carcassonne with the latest version of this exciting bundle! Released to critical acclaim in 2000, Carcassonne has long captivated audiences with its simple yet engaging...
Out of stock Quick view

MSRP: $109.99
$87.99
Mansions of Madness Second Edition is a fully cooperative, app-driven board game of horror and mystery for one to five players that takes place in the same universe as Eldrich Horror and Elder Sign...
Add to Cart Quick view

MSRP: $69.99
$47.99
Small World is a fun, zany, light-hearted civilization game! In Small World, players vie for conquest and control of a world that is simply too small to accommodate them all. Designed by Philippe...
Add to Cart Quick view

MSRP: $99.95
$79.96
From beneath the shadow of London's Big Ben to the towering arches of Rome's Colosseum, from the brilliant onion domes of Moscow to the delicate Eiffel Tower in Paris, Ticket to Ride Europe takes you...
Out of stock Quick view