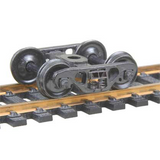 The Barber S-2 70-ton Roller Bearing truck is a logical development from the original friction bearing truck first introduced in the 1940 Ft.s. Our truck is based on a prototype built in 1967, however, the basic design was first introduced in the late 1950 Ft.s. The sturdiness of the BarberÂ® S-2 truck is evidenced by the forty plus years it has rode the rails to date. A careful observer will spot these trucks in interchange use today. This truck can be used under almost any pre-1970 built 70-ton rolling stock. Truck Features â€¢ Code 110 (.110 wide) 33" smooth back "standard" wheels â€¢ Accurate markings â€¢ Incredible detail True to prototype â€¢ Non-magnetic Metal wheels â€¢ Highly Flexible sprung trucks â€¢ Metal SideFrames & Fully Sprung Bolster â€¢ Smooth tracking Free rolling Contoured Insulated Axles â€¢ RP-25 Free rolling wheels â€¢ Patent number 5,768,999 code110 .110" Code 110 "Standard" Wheels The term Code 110 and Code 88 relates to the width of the wheels and has no relationship to track code. Code 110 wheels are .110" wide and Code 88 are .088" wide. Code 110 wheels are the common (or "Standard") width wheels and Code 88 are what is called "Semi-Scale" and are used when the modeler wants a more prototypical looking wheel width. Actual HO-Scale prototypical wheel width would be around .067" wide and although they will run OK on the average track they will not go through common turnouts and crossings. Code 88 (.088") is just about the minimum width of wheel that will run on most standard or common track if gauged correctly. It really is a matter of appearances because there's very little operational differences between running Code 110 or Code 88 wheels. Code 88 wheels look really good and are most noticeable on open frame cars like hoppers and tank cars. However, they also look great on boxcars, gondolas, and reefers but not quite as noticeable. As mentioned above track code and wheel code have no relationship meaning Code 110 and Code 88 will run on most any code of track. Track code is simply the measured height of the rail, code 100 is .100" tall, code 83 is .083" tall, code 70 is .070" tall, and so on.

MSRP: $10.79
$8.74
Arch Bar Trucks Metal Fully Sprung Equalized Trucks 1pr. Mounts with a #2 or 2-56 screw. Mounting Screws not Included. The Arch Bar Truck is typical of these trucks from around the turn of the...
Add to Cart Quick view