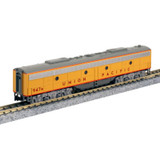 The E8 and E9 diesel locomotives share the similar “bulldog nose” carbody style as the shorter, more popular F7 and were powered by two separate 12-cylinder prime movers (i.e., diesel engines) capable of producing 2250/2400 hp. E8 and E9 locomotives also rode on A-1-A trucks (powered axle-idler axle-powered axle), resulting in an exceptionally smooth ride favored by crews. The E8 and E9 were produced in both A-units and cabless B-units; the A-units were usually built to railroad specification of either single or dual headlight and freight or passenger pilot. Like the F3 and F7 of the same time period, the E8 and E9 were utilized in both passenger and freight service.

The Kato EMD E8 and E9 locomotive both come in A and B (cabless) variations, similar to that of their smaller F unit sister locomotives.

MSRP: $290.00
$189.31
The “City of Los Angeles” was one of the Union Pacific’s “City of” trains, and a direct competitor to trains such as the California Zephyr and Santa Fe...
Out of stock Quick view