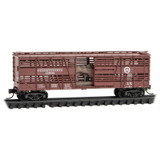 Built in the 1910s and shopped in the mid-1930s, these stock cars with Coil Elliptic trucks were primarily used for cattle, but also carried sheep and other livestock. Pennsylvania was a large Class 1 railroad formed in 1846 and grew to be a predominant shipper on the east coast until 1968 when it merged with rival New York Central to form Penn Central. Includes Cattle load.

MSRP: $85.00
$80.33
Prototype Information: In the 1940’s, the Southern Pacific “Morning Daylight” was possibly the world’s most beautiful train, its orange and red striping being reserved for the SP’s premier train...
Add to Cart Quick view
Sale