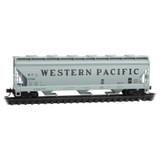 Built in April of 1967, this three-bay ACF Centerflow covered hopper with Barber Roller Bearing trucks belonged to an order of 50 cars. Western Pacific used the cars to ship minerals such as potash, salt, and phosphates, along with some grains. Western Pacific was a Class 1 Railroad formed in 1903 in order to offer another rail option to the established Utah routes of the Southern Pacific. WP was acquired in 1982 by Union Pacific Railroad.

MSRP: $34.90
$28.27
$25.44
These 4180 cu. ft. Airslide hoppers with Barber Roller Bearing trucks were built in 1973. With a special epoxy lining, these cars were specifically designed for use with fine-grained commodities,...
Add to Cart Quick view