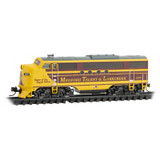 Built in September of 1944, this EMD FT locomotive was a 1,350 horsepower diesel-electric locomotive and was purchased by the Medford, Talent & Lakecreek as a replacement for their aging steam locomotives. MT&L’s small fleet of FT’s quickly became their primary road and switching power and were used for decades until being repainted in the early 1970s and eventually retired.

MSRP: $29.95
$24.26
$17.97
This 3-dome tank car is green with red and white herald and runs on Bettendorf trucks. Celanese was founded in 1918 in New York City as the American Cellulose & Chemical Manufacturing Company,...
Out of stock Quick view

MSRP: $24.95
$20.21
Need more HumveeÂ® vehicles on your military consist or layout? You can now get our N scale Humvee separately as an undecorated unassembled kit or a decorated and partially assembled vehicle! The...
Out of stock Quick view