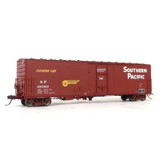 In 1959 Pacific Car & Foundry (PC&F) worked with Southern Pacific to design and develop a new series of cars, Insulated Boxcars or RBLs. They started with centered 9-foot doored cars in a Plate B clearance for the canned and food stuffs trade that was needed on a majority of SP and it's subsidiary SSW's service areas. As the design developed over 3 years, in late 1962 a 10-foot offset doored design was designed. Which is the subject of this model.

The entire upper body of the boxcar was riveted together from the bottom sill up, in the 6+5 R pattern. Whereas the underframe was fully welded. These were insulated, had proven 20-inch cushioned underframes,  usually Hydra-Cushion cushioning devices. Many types and configurations and combinations of loaders were used as per customer specifications, but these specifically had LD Bulkheads, Side Wall Fillers

MSRP: $14.99
$11.90
Track-Bed Roll offers a smooth, almost seamless application. It deadens sound, requires no pre-soaking like cork, remains flexible and will not dry out or become brittle. Aligns well with corkÂ Â ...
Out of stock Quick view