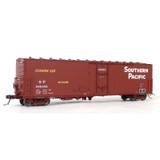 In 1959 Pacific Car & Foundry (PC&F) worked with Southern Pacific to design and develop a new series of cars, Insulated Boxcars or RBLs. They started with centered 9-foot doored cars in a Plate B clearance for the canned and food stuffs trade that was needed on a majority of SP and it's subsidiary SSW's service areas. As the design developed over 3 years, in late 1962 a 10-foot offset doored design was designed. Which is the subject of this model.

The entire upper body of the boxcar was riveted together from the bottom sill up, in the 6+5 R pattern. Whereas the underframe was fully welded. These were insulated, had proven 20-inch cushioned underframes,  usually Hydra-Cushion cushioning devices. Many types and configurations and combinations of loaders were used as per customer specifications, but these had their loaders removed and therefore became classified XMI, general purpose boxcars with insulation. Quite a useful thing to have as a general purpose boxcar with out the maintenance headaches of loaders.

MSRP: $14.99
$11.90
Track-Bed Roll offers a smooth, almost seamless application. It deadens sound, requires no pre-soaking like cork, remains flexible and will not dry out or become brittle. Aligns well with corkÂ Â ...
Out of stock Quick view