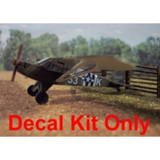 Piper J-3 Cub L4 GrasshopperÂ  Decal Kit Decals to convert the N scale Piper Cub kit to the military L$ Grasshopper. This is an unfinished kit and will require construction and finishing   History:Â Dating back to a 1930 design called theÂ Taylor Cub, theÂ Piper J-3 CubÂ design was vastly popular as a civilian trainer and sport plane for at least three years before the US Army Air Corps selected the aircraft to be evaluated as an artillery spotter/director platform. The first J-3s delivered, powered by a 50-hp Lenape Papoose 3-cylinder radial engine, were designated theÂ O-59. 40 were delivered in 1941. Shortly thereafter, the Army ordered a new version powered by a 65-hp Continental O-170-3 flat-four engine. It was originally designated theÂ O-59A, but due to an Army designation change, it was called theÂ L-4A. 948 were eventually delivered, and the nicknameÂ "Grasshopper"Â was almost immediately applied.   This is for decals ONLY.Â  Plane not included.

MSRP:
$20.25
This Piper Cub Kit can be used on layouts with era starting from the mid 1930's to present day
Add to Cart Quick view

MSRP:
$12.15
You want to add a touch of realism to your layout?Â  Add some details. Piper J-3 Cub This Piper Cub can be used on layouts with era starting from the mid 1030's to present day This is an...
Add to Cart Quick view

MSRP: $114.99
$86.47
The Depot is a classic whistle stop depot suitable for any layout. It features clapboard siding, a weathered cedar shake roof, covered outside passenger waiting area and a modeled interior that...
Out of stock Quick view

MSRP: $59.98
$48.59
The Walthers Cornerstone HO Scale City Station harks back to the time when the depot was an indicator of a community's success. Railroads built large, elaborate stations at more important towns that...
Out of stock Quick view

MSRP: $19.98
$16.19
Make your WalthersMainline locos even more realistic in minutes with this Diesel Detail Kit! The complete set of HO grab irons fits the standard locations on the model, and they're made of durable,...
Add to Cart Quick view

MSRP: $6.95
$5.22
The Rix Roadway for N Scale is an injection plastic kit designed to be used with the Rix Highway Overpass or any custom built highway, street or road. Each roadway is a scale 50 feet long by 22 feet...
Add to Cart Quick view

MSRP:
$12.15
The North American P51 Mustang makes for great scene in a park or use it flying over your layout. This is an unfinished kit and will require construction and finishing
Add to Cart Quick view

MSRP:
$4.05
Chain Link Fence Osborn Models You want to add a touch of realism to your layout?Â  Add some details.Â  Contains 100 scale feet Chain link that can be used to fence off those important areas. Osborn...
Add to Cart Quick view