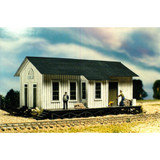 The Seabord Savanna-Americus Railway Depot at Fort Davis in southern Macon County Alabama is characteristic of small town railroad stations constructed across the South at the turn of the 20th century. The simple wooden structure with board-and-batten siding was built in 1904 to replace an 1892 depot, which had burned. In the 1970s the Seabord System discontinued service to Fort Davis and gave the depot to the Fort Davis Historical Group. A decade later the railroad tracks through town were removed, leaving the quaint station isolated from its original purpose. (Alabama Trust for Historic Preservation, Places in Peril Report). Anyone looking for a small depot to handle commerce on their layout will appreciate its charming appeal. It will require about 1 7/8 x 3 1/4 inches of space on your layout. Showcase Miniatures N Scale Ft Davis Railroad Depot

MSRP:
$39.95
Though it is easily assumed that the town of Fort Davis, Alabama had a military basis, it was actually named for one of its founders, a man whose first name was Fort and last name was Davis. Richard...
Add to Cart Quick view

MSRP:
$11.25
This 13 part kit can be configured in many different ways to add roof top detail to your buildings. (Also available in Z Scale) Not pictured - 2 smaller rectangular pieces. Showcase Miniatures N...
Out of stock Quick view

MSRP:
$10.25
A set of Air Conditioning and vent units for detailing your buildings (Also available in Z Scale, if you have smaller buildings that would require smaller fixtures) Showcase Miniatures N Scale Roof...
Add to Cart Quick view

MSRP:
$12.95
This is a static signal kit. The blade can be placed in any position. The kit includes photo-etched details, metal rod, and pewter cast signal head, finial, and base. Also, your choice of five...
Add to Cart Quick view

MSRP: $31.49
$26.28
The Model: A perfect small town American whistle stop depot.Â  Based on a Milwaukee Road prototype.Â  The original was built in the late 1800's and still stands today!Â Â This depot could be found on...
Out of stock Quick view

MSRP:
$51.23
Cheltenham StationRslaserKitsÂ Craftsman Laser Cut Kits.Â Like all craftsman kits these are unfinished and will take som etime to build and finish.Is one of many built to a standard design in...
Add to Cart Quick view

MSRP: $39.98
$32.39
Based on a typical wooden train station, the Walthers Cornerstone Clarkesville Depot is typical of wooden depots built throughout North America after 1900. Many railroads adopted standard depot...
Add to Cart Quick view

MSRP:
$29.99
DeLoney's Barn is patterned after the simple but functional barns found across the United States. We have designed this particular barn so that a weather worn look is easily achieved by you, the...
Add to Cart Quick view

MSRP: $75.85
$61.44
Â RslaserKits - RSL3041 - Keystone Mill - N Scale Craftsman Laser Cut Kits. Like all craftsman kits these are unfinished and will take sometime to build and finish. The original Keystone Mill was...
Out of stock Quick view

MSRP:
$53.95
This structure is designed to stand out as the focal point of your siding and can serve well in both the steam and the diesel eras. (Early 1900s to current). This model requires about 7 inches by 2...
Add to Cart Quick view