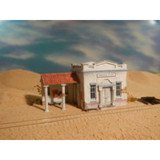 From the Thomas A. Yorke Design Studio--- Resin Cast Components by Fine N-Scale.--- Cast Metal Details.--- Laser Cut Windows.--- Graphic Details.--- Exploded View Assembly Instructions.--- Tom Yorke is well known in O and HO Scale circles for his spectacular structure and railroad related kits. His attention to detail and innovative design style make his models unique and much sought after. His craftsmanship gives all of his models "The Look" that sets them apart from the norm.--- "In the Fall of 2012, Walter Vail contacted me about Showcase Models doing some of my models for the N and HO scale market. Since those scales are really way too small for me to work in at this stage, I decided that his company would be a wonderful way for other model railroaders to enjoy my kits. --- Quote from Tom: "My own modeling started way back in about 1955 with an American Flyer set. I started building my own freight cars from scratch in wood from the Dollar Car series by H. O. Williams. Little did I know at the time that I would be working for him at Miami Model Builders in later years. Howie taught me a lot about miniatures. After I graduated from college I became an Advertising Art Directer for several years before starting work in California for WED Enterprises, now known as Walt Disney Imagineering. I worked on many projects over the years including my first which was the redesign for the Disneyland Railroad when the Santa Fe decided to pull its sponsorship back in 1974. I have worked as a Graphic Designer for every park of Disney's until my retirement in 2000. While working at Disney I started Thomas A Yorke Ent. back in 1976. I have spent almost every year since then designing and manufacturing Hydrocal buildings, mostly in O scale. I am now devoting most of my time doing custom work and modeling my own small Gn15 empire in the basement."......Tom Yorke Showcase Miniatures N Scale The Tom Yorke Deport at Frijole Flats

MSRP:
$13.95
This Flatbed (I type Cab) is that of a 1968 vintage. However the cab style of this particular truck first became available in 1962 and then continued to be offered with virtually minimal cosmetic...
Out of stock Quick view

MSRP:
$11.25
This 13 part kit can be configured in many different ways to add roof top detail to your buildings. (Also available in Z Scale) Not pictured - 2 smaller rectangular pieces. Showcase Miniatures N...
Out of stock Quick view

MSRP:
$10.25
A set of Air Conditioning and vent units for detailing your buildings (Also available in Z Scale, if you have smaller buildings that would require smaller fixtures) Showcase Miniatures N Scale Roof...
Add to Cart Quick view

MSRP:
$12.95
This is a static signal kit. The blade can be placed in any position. The kit includes photo-etched details, metal rod, and pewter cast signal head, finial, and base. Also, your choice of five...
Add to Cart Quick view

MSRP:
$54.95
Do you remember the last time you were headed out of a small town and just before you got to the city limits there was a old worn out sign that said â€œlast gas for 100 miles - 3 mile aheadâ€? Then,...
Add to Cart Quick view

MSRP:
$29.99
The Seabord Savanna-Americus Railway Depot at Fort Davis in southern Macon County Alabama is characteristic of small town railroad stations constructed across the South at the turn of the 20th...
Add to Cart Quick view

MSRP:
$36.95
Gas stations were a necessity for travel along the Route - but - just selling gas wouldn't keep Mom and Pop in business. Up sprang the novelty gas stations to get a traveler's attention for both a...
Add to Cart Quick view

MSRP:
$34.95
Trading Posts sprouted up all along the Route selling all sorts of native and local hand made items. Each post trying to have that unique trinket to attract traveler's attention. This kit features:...
Add to Cart Quick view

MSRP:
$53.95
This structure is designed to stand out as the focal point of your siding and can serve well in both the steam and the diesel eras. (Early 1900s to current). This model requires about 7 inches by 2...
Add to Cart Quick view

MSRP:
$36.95
LEE KING RADIATOR & MUFFLER REPAIR SHOP on ROUTE 66 - It was simply two lanes of concrete and blacktop connecting the Midwest and the West Coast but it became a cultural icon. Nothing brings back...
Add to Cart Quick view

MSRP:
$34.95
Cafe eateries abounded - each with their own special cuisine hoping to provide a memorable taste to hungry travelers - memorable enough for them to stop in again. This kit features: Precision laser...
Add to Cart Quick view

MSRP:
$29.99
DeLoney's Barn is patterned after the simple but functional barns found across the United States. We have designed this particular barn so that a weather worn look is easily achieved by you, the...
Add to Cart Quick view