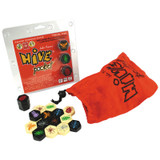 With no setting up to do, the game begins when the first piece is placed down. As the subsequent pieces are placed this forms a pattern that becomes the playing surface (the pieces themselves become the board). Unlike other such games, the pieces are never eliminated and not all have to be played. The object of the game is to totally surround your opponent`s queen, while at the same time trying to block your opponent from doing likewise to your queen. The player to totally surround his opponent`s queen wins the game. Smart Zone Games Hive: Pocket Playing Time: 20 Number of Players: 2 Suggested Age: 9+

MSRP: $12.75
$9.81
Description The Mosquito pieces can be added to a standard Hive set before the start of the game giving each player 12 pieces to play with. During the game, they are placed in the same...
Add to Cart Quick view

MSRP: $12.75
$9.81
Hive: The Pillbug is a new pair of tiles that can be added to Hive.  The pillbug moves like the queen bee - one space at a time - but it also has a special ability that it may use instead of...
Add to Cart Quick view

MSRP: $24.99
$20.83
The Disney Family Edition of Codenames combines the hit social word game with some of Disneyâ€™s most beloved properties from the past 90 years. Two Cluemasters give one-word clues to help their...
Add to Cart Quick view

MSRP:
$4.05
Tenax-7R Plastic Welder RHEBCOÂ Thin Formula Spreads itself through a joint Applied a drop at a time, usually one drop will do Cures in Seconds
Out of stock Quick view

MSRP: $9.99
$7.97
While other versions of Timeline are focused on certain elements (events, inventions, discoveries, etc.), Timeline Classic is a highly engaging version that encompasses multiple themes in one...
Add to Cart Quick view

MSRP: $9.99
$7.97
Was the light bulb invented before or after glasses? In Timeline Inventions, you can learn the answer to this question and many more, all while having fun! Each card has a different invention, and on...
Add to Cart Quick view