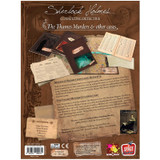 Sherlock Holmes Consulting Detective is a cooperative game where the players try to solve mysterious cases by walking the streets in search of clues. Unravel the string of intrigues, answer a series of questions, and compare your detective skills to those of the master sleuth himself, Sherlock Holmes. â€‹ The Thames Murders & other cases is a standalone game The Thames Murders & other cases â€‹Solve 10 mysteries in Victorian London! The Mummy's Curse, The Munitions Magnate, The Pilfered. Paintings, The Thames Murders. Strange cases of the most famous detective ever: Sherlock Holmes! Equipped with a copy of The Times, a map of London, a directory, and - more importantly - your logic, you will roam the streets of London trying to solve the most heinous crimes. Will you visit the crime scene? Meet Inspector Lestrade? The decision is in your hands and each clue that you follow will bring you a step closer to the truth. â€‹ This game reimplements Sherlock Holmes Consulting Detective, initially published by Ystari (the 10 cases are the same). â€‹ Designers: Gary Grady - Suzanne Goldberg - Raymond Edwards Artwork: Pascal Quidault - Arnaud Demaegd - Neriac - Bernard Bittler Space Cowboys Sherlock Holmes Consulting Detective - The Thames Murders Playing Time: 90+ Min minutes Number of Players: 1-8 Suggested Age: 14+

MSRP: $24.99
$19.99
The multi award-winning game Jaipur, by Sebastien Pauchon, returns with all new artwork by Vincent Dutrait and the same great gameplay. Players take on the roles of two of the cityâ€™s most powerful...
Add to Cart Quick view

MSRP: $49.99
$39.14
Sherlock Holmes is a cooperative game. You and your fellow players are Wigginsâ€™ Baker Street Irregulars, the London urchins who assist the mastermind detective in his investigations. Interrogate...
Add to Cart Quick view

MSRP: $44.99
$35.99
Make a name for yourself in the prestigious and lucrative jewelry business of Renaissance Europe in Splendor, the award-winning game of gems! First, collect raw gems to fund the development of mines...
Add to Cart Quick view

MSRP: $54.98
$44.54
Add an authentic touch to your HO industrisal district with the Cornerstone Cross-Dock Truck Facility! Used by trucking companies large and small from the 1940s to present day to receive, sort and...
Add to Cart Quick view