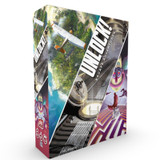 UNLOCK! Escape Adventures is now available in a big box format that includes 3 Adventures. In â€œThe Island of Doctor Goorse,â€ players visit an eccentric billionaireâ€™s island and attempt to escape. â€œThe Formulaâ€ tasks players with recovering a mysterious serum from a secret laboratory. And â€œSqueek & Sausageâ€ places everyone in a cartoon-style adventure to thwart Professor Nosideâ€™s dastardly plans! UNLOCK! is a series of escape adventures for up to six players. With one hour on the clock, players must work through a deck of sixty cards as a team, searching for clues, combining objects, and solving puzzles. The free UNLOCK! companion app runs the timer while providing clues, offering hints, and confirming successes. Once the team has reached a solution and entered the correct code into the app, they win the game! Space Cowboys UNLOCK! Escape Adventures Playing Time: 60 Number of Players: 1-6 Suggested Age: 10+

MSRP: $24.99
$19.99
The multi award-winning game Jaipur, by Sebastien Pauchon, returns with all new artwork by Vincent Dutrait and the same great gameplay. Players take on the roles of two of the cityâ€™s most powerful...
Add to Cart Quick view

MSRP: $49.99
$39.14
Sherlock Holmes Consulting Detective is a cooperative game where the players try to solve mysterious cases by walking the streets in search of clues. Unravel the string of intrigues, answer a series...
Add to Cart Quick view

MSRP: $49.99
$39.14
Sherlock Holmes is a cooperative game. You and your fellow players are Wigginsâ€™ Baker Street Irregulars, the London urchins who assist the mastermind detective in his investigations. Interrogate...
Add to Cart Quick view

MSRP: $44.99
$35.99
Make a name for yourself in the prestigious and lucrative jewelry business of Renaissance Europe in Splendor, the award-winning game of gems! First, collect raw gems to fund the development of mines...
Add to Cart Quick view