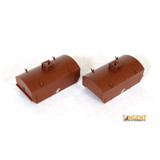 The PRR built removable coil hoods (covers) for the Samuel Rea Shops G41A gondolas to protect the steel loads from moisture and from damage to the steel. These coil hoods were painted and included a stenciled railroad logo. Starting during the PC era, the G41A hoods received a variety of repaints where there was mixing and matching of PRR/PC (and later CR) hoods in the 1970s. It is for this reason that Tangent offers these RTR painted and lettered hoods as separate parts to fit the Tangent G41A model. We offer two different PC and CR paint schemes in the hood packs so you can replicate that prototypical variety found in the prototypes. Each of these Hood 2-Packs contain a pair RTR assembled, painted and lettered Hoods. Fun fact: the Tangent hoods are “stackable” just like the prototypes!

MSRP: $20.99
$16.97
For reaching places not accessible with other needle files. Ideal for working on uneven surfaces. Although these are double ended files, they are still the same size as the needle files and are...
Out of stock Quick view