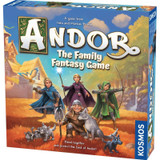 Venture into a land of fantasy and legend! In this cooperative family role-playing game, each player chooses one of four powerful heroes: the magician, the warrior, the archer, or the dwarf. Your heroic journey begins with a mission to rescue some wolf cubs that are lost in a dangerous mine. But, before embarking on your search, your party must get past Mart, the bridge guard, by completing all of his tasks. Only then will he let your party cross his bridge and enter the mine. However, danger still lurks on the horizon, as a dragon encroaches on the castle Rietburg just as you approach the mine. Should he arrive at the castle before your heroes rescue the wolf cubs, your party will lose the mission â€” and the game. If your party rescues the cubs first, you win! Andor: The Family Fantasy Game features gameplay that is similar to the popular Legends of Andor, but more approachable to younger players, making it a great introduction to the entire Legends of Andor series of games. Thames and Kosmos Andor: The Family Fantasy Game Playing Time: 30-45 minutes Number of Players: 2-4 Suggested Age: 7+

MSRP: $89.99
$70.46
Dive into the world of Carcassonne with the latest version of this exciting bundle! Released to critical acclaim in 2000, Carcassonne has long captivated audiences with its simple yet engaging...
Out of stock Quick view

MSRP: $49.99
$42.53
Bequest Each round, every player gets a hand of five cards that theyâ€™ll need to split with their neighbor, representing some of Dr. Schismâ€™s assets. It could be Treasure, Gadgets, the deeds to...
Add to Cart Quick view

MSRP:
$28.51
All Aboard for Excitement! It is the height of the Steam Age and the whistle of the Iron Horse harkens the boom of small towns across the country into major hubs of transportation and economic...
Add to Cart Quick view

MSRP: $31.99
$24.06
Woodland Station Woodland Scenics All Aboard! Model the center of passenger train activity. Porters scurry about carting and loading luggage and assist passengers with boarding, while the conductor...
Out of stock Quick view