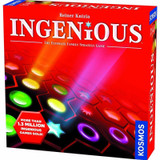 Ingenious has captured the hearts and minds of families and gamers around the world. This international bestseller is one of those rare games that appeals to serious gamers and casual "non-gamers" alike. In Ingenious, one to four players take turns placing colored tiles on the game board, earning points for the number of matching colored symbols that radiate outward in straight lines from the placed tile. Each tile is shaped like two hexagons stuck together along one edge, each hexagon with a colored symbol on it. Thus, it's possible to earn points by extending lines of matching symbols in five directions per hexagon, and ten per tile. The trick is that the winner is not necessarily the player who has the highest scores in a few colors. Rather, the player with the highest score in his or her lowest-scoring color wins! It's ingenious...and it's hugely entertaining, time and time again. The fun simply radiates in all directions! Thames and Kosmos Ingenious: The Ultimate Family Strategy Game Playing Time: 30-45 minutes Number of Players: 1-4 Suggested Age: 8+

MSRP: $34.95
$28.31
Venture into a land of fantasy and legend! In this cooperative family role-playing game, each player chooses one of four powerful heroes: the magician, the warrior, the archer, or the dwarf. Your...
Out of stock Quick view

Repos Production WID01 - When I Dream

MSRP: $39.99
$31.31
Night has fallen and your mind is floating in a magical world of dreams, but rest eludes youâ€”the Dream Spirits want to have some fun tonight! Communicate with the Dream Spirits and try to interpret...
Add to Cart Quick view

MSRP: $24.95
$20.96
Retail Edition of Sagrada: 5-6 Player Board Game Expansion by Floodgate Games. Not a stand-alone game. This is an expansion of Sagrada. Add to your Sagrada experience with the 5-6 Player Expansion!...
Add to Cart Quick view

MSRP: $39.95
$32.36
As a skilled artisan, you will use cleverness and careful planning to craft a stained glass window masterpiece in the Sagrada Familia. Players will take turns drafting glass pieces, represented by...
Add to Cart Quick view