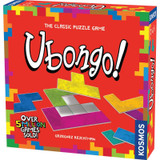 Ubongo is a fast-paced, addictive, and easy-to-learn geometric puzzle game. Players race against the timer and against each other to solve a puzzle of interlocking shapes. The faster you solve the puzzle, the more gems you get. The player with the most valuable gem treasure after nine rounds of solving puzzles wins! Hereâ€™s how it works: Each player receives a set of 12 tiles. The tiles are polyominos â€” geometric shapes formed of equal-size squares joined edge to edge in different arrangements. At the start of each round, each player gets a new puzzle board. A roll of the die determines which tiles you must use to perfectly fill in the empty spaces on the puzzle board. Any players who complete the puzzle within the time limit yell out â€œUbongo!â€ and grab a gem at random from the bag. The fastest player also gets a blue gem and the second fastest an amber gem. Each gem color is worth a different amount of points. After nine rounds, the player with the most valuable gem collection wins. Download the free companion app, which helps you learn how to play the game, and includes a game timer, a solo game timer, and solution keys. Thames and Kosmos Ubongo: The Classic Puzzle Game Playing Time: 25 minutes Number of Players: 1-4 Suggested Age: 8+

MSRP: $34.95
$28.31
Venture into a land of fantasy and legend! In this cooperative family role-playing game, each player chooses one of four powerful heroes: the magician, the warrior, the archer, or the dwarf. Your...
Out of stock Quick view

MSRP: $14.99
$12.38
This new version of Spot It! combines different characters from Paw Patrol with one of the most beloved family card games! Players try to spot the single matching character between two cards in a...
Add to Cart Quick view

Repos Production WID01 - When I Dream

MSRP: $39.99
$31.31
Night has fallen and your mind is floating in a magical world of dreams, but rest eludes youâ€”the Dream Spirits want to have some fun tonight! Communicate with the Dream Spirits and try to interpret...
Add to Cart Quick view

MSRP: $27.95
$21.92
With no setting up to do, the game begins when the first piece is placed down. As the subsequent pieces are placed this forms a pattern that becomes the playing surface (the pieces themselves become...
Add to Cart Quick view

MSRP: $12.99
$10.17
Test your observational skills and hone your reflexes with the award-winning gameplay of Spot It!, a game of lightning-fast choices for a group of two to eight players. The game functions on a simple...
Add to Cart Quick view