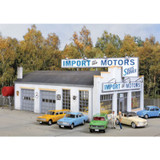 Foreign brands have been part of the American motoring scene since the early days. The Walthers Cornerstone Import Motors kit is just right for an independent dealership. It was a Benz car tootling around Detroit in the 1890s that caught the attention of an Edison Illuminating Company engineer named Henry Ford who had been working on his own idea for a car. Even as the American auto industry flourished, there was always a trickle of foreign cars as celebrities and the well-to-do selected Rolls-Royces and Mercedes. The trickle became a flood in the years following World War II: the United States was essentially the only significant new car market in the world and American GIs returned from serving in Europe with a taste for the small, sporty cars they found there. By 1959, about one car out of every ten sold in the U.S. was an import. Sales of imports dropped in the 1960s but came back strong with the oil crisis in the early 1970s, when small cars from Europe and Japan offered relief from gas lines and high prices. Since few of the European manufacturers had actual representation in America during the 1950s, 1960s and even into the 1970s, importation and distribution were usually handled by independent entrepreneurs, such as Max Hoffman in New York City, and most U.S. dealers offered several different brands. Freed from the requirements imposed by the Detroit automakers, import car dealerships were typically small and occupied a variety of different structures that offered space for a display and a service bay. Import Motors features two service bays, space for a small showroom in front and a large rooftop sign. A small lot adjacent to the building will be plenty to handle the limited inventory these businesses generally carried. Import Motors as shown measures: 7-1/4 x 5-3/8 x 3-7/8" 18.4 x 13.6 x 9.4cm Import Motors is one of manyÂ Cornerstone HO Scale businesses. Classic 60s or 70s dealership for import car brands Multiple import brand signs included Rooftop sign Colorful decals Molded in three colors and clear plastic Easy-to-build plastic kit

MSRP: $39.98
$32.39
Back when an order for "sinkers and suds" brought you donuts and coffee, gleaming stainless steel restaurants like the Walthers Cornerstone Miss Bettie's Diner sprang up from coast to coast...
Add to Cart Quick view

MSRP: $59.98
$48.59
The Walthers Cornerstone HO Scale ADM Concrete Grain Elevator is patterned after modern concrete elevators in use from coast to coast since the 1950s. Grain traffic touches almost every corner of the...
Out of stock Quick view

MSRP: $44.98
$36.44
Whether used along small-town main Street or deep in the heart of a big city's downtown, the Walthers Cornerstone Bailey Savings and Loan is an ideal addition to scenes set in the 1900s into the...
Add to Cart Quick view

MSRP: $44.98
$34.55
Modeling a modern Plastic Pellet Transfer is easy with this Walthers Cornerstone kit! Derived from crude oil, plastics are first formed into tiny pellets which become the raw materials for everything...
Out of stock Quick view

MSRP: $29.98
$21.84
Based on typical North American prototypes, these non-operating stationary Walthers Cornerstone Track Scales make great additions to yard or industrial scenes from the steam-era to the present...
Out of stock Quick view

MSRP: $44.98
$36.44
Better hop in the old jalopy and check out the Cornerstone Vintage Ford Dealer! From a brand-new ride to an affordable used car or truck, dealerships like this have been a fixture of downtowns big...
Add to Cart Quick view

MSRP: $52.99
$39.85
Model the time when food tasted better delivered to your car window. True to vintage American car culture, D's Diner sets a nostalgic, detailed scene with a drive-in restaurant right out of the age...
Add to Cart Quick view

MSRP: $27.98
$22.67
From farm to big city, the Conerstone Pole Barn and Sheds kit adds plenty of detail to your HO layout! With parts for four complete buildings and accessories, features of these structure kits...
Out of stock Quick view

MSRP: $49.98
$40.49
Prefabricated metal structures have been part of the support facilities at rail yards, intermodal terminals and industrial parks since the 1950s, and the Cornerstone Vehicle Maintenance facility...
Out of stock Quick view

MSRP: $54.98
$44.54
Prototypes for the Walthers Cornerstone Trackside Oil Dealer with Storage Tanks could be seen along North American railroad lines beginning in the 1920s as oil became popular for heating, industrial...
Add to Cart Quick view