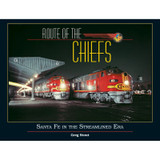 This long-anticipated volume is finally here! Route of the Chiefs is the ultimate photographic history of how the Santa Fe rose to being one of the foremost passenger carriers in America’s streamliner era. From the premiere Super Chief to the extensive network of secondary trains, this new 256-page volume is the next best thing to being on board.

If ever a railroad was a friend to the passenger, Santa Fe was it. From the 1892 version of the California Limited to the Santa Fe De-Luxe, to the 1926 Chief, to the 1937 Super Chief, no other railroad offered greater luxury to its first-class clientele. Later, with the inauguration of the 1938 El Capitan, the company brought fast, modern accommodations to coach travelers as well. Add to that the remaining Chiefs and streamliners, including the San Francisco Chief, Texas Chief, the Chief itself, plus the Grand Canyon, Chicagoan, Kansas Cityan, San Diegan, Golden Gates, and a host of supporting cast players like The Cavern, El Pasoan, Tulsan and others, and it is hard to conceive of any railroad that did it better, or even as well.

Following Route of the Eagles (1995) and Route of the Rockets (1997), Route of the Chiefs is Greg Stout’s third title for White River Productions, and twenty-first overall. Now retired from a career that included 28 years in the automotive industry and 12 years in public education, he now lives with his wife of 43 years in Cape Girardeau, Mo.

Chapter 9: Ports of Call for Chiefs on the Move

Chapter 11: Not Quite a Chief: The Grand Canyon

Appendix B: Power for the Chiefs: The Locomotive Fleet

MSRP: $79.95
$59.36
Southern Pacific Western Division is an all-color pictorial covering the operations of the Southern Pacific Railroad in northern and central California, from Sacramento to the San Francisco Bay...
Add to Cart Quick view

MSRP:
$22.00 - $30.00
The 100% cotton men's heavyweight tee will help you land a more structured look. It sits nicely, maintains sharp lines around the edges, and goes perfectly with layered streetwear outfits. Plus, it's...
Options Quick view

MSRP: $16.99
$13.76
National Geographicâ€™s new Railroad Legacy Map of the United States illustrates the many ways railroads have impacted the nation and shaped peopleâ€™s daily lives.Â From the creation of time zones...
Out of stock Quick view

MSRP: $79.95
$59.36
Some railfans wish they lived in southern California. Others were fortunate enough to have been born there. Tom Gildersleeve, Gordon Glattenberg, and the late William H. "Hank" Mills are among the...
Add to Cart Quick view