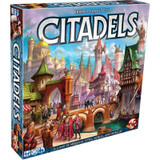 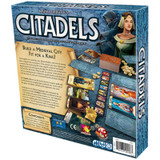 Build a medieval city fit for a king in this definitive edition of the acclaimed card game. To be selected for the coveted post of Master Builder, you must impress the monarchy by constructing a majestic medieval metropolis. In Citadels, players use the local citizens to acquire gold and build districts to complete their city. Players draft characters each round, looking for those who provide the desired special abilities to further develop their citiesâ€”or hinder their opponents' efforts. Hire the elusive Thief and pick one of your rivalâ€™s pockets, or commission the Artist to beautify your districts and increase their value. Plot, scheme, and deceive your way to the top as you attempt to predict your opponentsâ€™ actions and foil their plans. Only the best city will earn its steward the title of Master Builder. Bruno Faidutti designed the original Citadels, which was released in 2000. It is now considered one of the great card games of the modern era. This definitive edition includes characters and unique districts from the original base game and its Dark City expansion, as well as a brand new cast of nine characters and twelve completely new unique districts to offer more gameplay options than ever before! Z-Man Games Citadels Playing Time: 20-60 Number of Players: 2-8 Suggested Age: 10+

MSRP: $34.99
$28.34
The city of Carcassonne is celebrating its national holiday. As is the tradition, people mark the occasion by setting the cityâ€™s sheep, hens, and cows loose in the streets. From dawn till dusk, the...
Out of stock Quick view

MSRP: $39.99
$31.31
Dive into the world of Carcassonne with the latest version of this exciting bundle! Released to critical acclaim in 2000, Carcassonne has long captivated audiences with its simple yet engaging...
Out of stock Quick view

MSRP: $79.99
$64.80
Transform a meager settlement into a might empire whose culture will be your greatest achievement! Â  Â  Â To accomplish this, you will have to invent new technologies, build grand...
Add to Cart Quick view

MSRP: $49.99
$44.79
The Sorcerer is out to get you! Find your way among the illusions but beware of the traitor in your ranks! The Grimoire guides his team towards the exit using images, on which he points at certain...
Add to Cart Quick view

MSRP: $69.99
$54.80
As more and more settlers head west, new cities pop up like mushrooms. Due to the distances between them, these new cities quickly come to rely on new railroads for the transport of vital goods...
Add to Cart Quick view

MSRP: $89.99
$70.46
Dive into the world of Carcassonne with the latest version of this exciting bundle! Released to critical acclaim in 2000, Carcassonne has long captivated audiences with its simple yet engaging...
Add to Cart Quick view

MSRP: $109.99
$87.99
Star Wars™: Rebellion is a board game of epic conflict between the Galactic Empire and Rebel Alliance for two to four players!Experience the Galactic Civil War like never before. In Star Wars:...
Add to Cart Quick view

MSRP: $12.99
$10.17
Test your observational skills and hone your reflexes with the award-winning gameplay of Spot It!, a game of lightning-fast choices for a group of two to eight players. The game functions on a simple...
Add to Cart Quick view

MSRP: $14.99
$11.99
Rev the engine and wait for the green light to send you hurtling across the countryside. Along the way, youâ€™ll need to keep the tank full, find your way around the speed limit, and avoid the...
Add to Cart Quick view