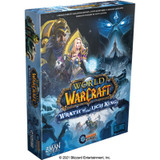 Team up as legendary heroes to combat the evil of the Lich King in a brand new Pandemic System game set in the realm ofÂ World of WarcraftÂ®. VENTURE TO AZEROTH In this epic adventure from theÂ World of WarcraftÂ®Â universe, players will journey to the frozen continent of Northrend to face the armies of the Lich King. This Pandemic System game showcases familiar mechanics and gameplay, now tweaked to embrace the setting of theÂ Wrath of the Lich King. Forts, temples, battlegrounds, and more populate the game board as you and your fellow heroes journey across the cold landscape. Along the way, youâ€™ll set up strongholds, complete quests, and do battle with legions of undead. BATTLE THE MINIONS OF THE LICH KING You and your friends will team up as legendary heroes from across Azeroth, each with their own unique abilities to help in and out of combat. Heroes such as Thrall, Warchief of the Horde; Varian Wrynn, King of Stormwind; Sylvanas Windrunner, Banshee Queen of the Forsaken; and many more are at your fingertips. As the Scourge grows, more undead will populate the board. Throw dice as you enter into battle against the hordes of ghouls and ferocious abominations, using hero cards to add power to your attacks, block incoming assaults, heal wounds, take mounts to far off spaces, and so much more. COMPLETE QUESTS As you fight your way to the Lich King, all manner of dark magic and terrible creatures under his control will need to be neutralized. This comes in the form of quests, a brand-new mechanic that can be completed as a team through a combination of dice rolls and using the hero cards at your disposal. However, each quest comes with its own dangers and hindrances. Complete these quests to move closer to the final assault on Icecrown Citadel, where the Lich King himself resides. Z-Man Games World of Warcraft: Wrath of the Lich King Playing Time: 45-60 minutes Number of Players: 1-5 Suggested Age: 14+

MSRP: $29.99
$27.99
Build a medieval city fit for a king in this definitive edition of the acclaimed card game. To be selected for the coveted post of Master Builder, you must impress the monarchy by constructing a...
Add to Cart Quick view

MSRP: $17.99
$14.60
Earn bonus points with the new King and Robber pieces in the sixth expansion for Carcassonne. Grow your city and claim the king tile for bonus points, or explore the roads instead and claim the bonus...
Add to Cart Quick view

MSRP: $39.99
$31.31
Dive into the world of Carcassonne with the latest version of this exciting bundle! Released to critical acclaim in 2000, Carcassonne has long captivated audiences with its simple yet engaging...
Out of stock Quick view

MSRP: $89.99
$71.99
Actions have consequences from one game to the next as you strive to avert global disaster in this stand-alone epic twist on Pandemic. Red and Blue Editions have variant covers; game contents are the...
Add to Cart Quick view

MSRP: $49.99
$39.99
Can you grow bamboo across your plantation as a mischievous panda eats wherever he can? In every game of Takenoko, the players take the role of gardeners of the Nippon emperor caring for his Giant...
Add to Cart Quick view

MSRP: $59.99
$47.99
From the craggy hillsides of Edinburgh to the sunlit docks of Constantinople, from the dusty alleys of Pamplona to a windswept station in Berlin, Ticket to Ride Europe takes you on an exciting train...
Add to Cart Quick view

MSRP: $59.99
$47.99
Build your tracks across the United States in Ticket to Ride, a fast-paced and strategic board game for two to five players. In every game, you and your opponents must compete for train cards, which...
Add to Cart Quick view

MSRP: $17.99
$14.60
New pieces offer tremendous strategic flexibility in the fifth expansion for Carcassonne. Abbey tiles act as monasteries, but you can use them to plug holes in the board by filling spaces surrounded...
Add to Cart Quick view